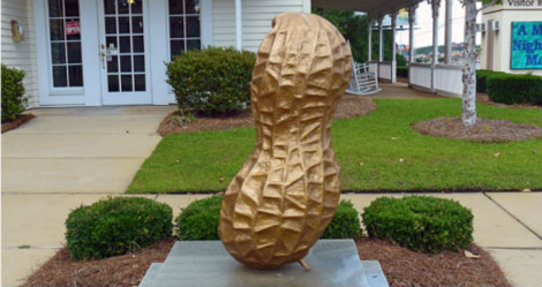 Compared to other towns in Alabama, Dothan is a young city. The area was originally inhabited by American Alibamu and Creek tribal Indians and settled around 1830 by nine families, who moved to southeast Alabama to harvest the abundant pine timber. The small community, known as Poplar Head, waned during the Civil War and later flourished during the Reconstruction Era with the arrival of the Pony Express. In 1885, the town, by than the largest in Houston County, was incorporated as Dothan. The name was chosen from a reference in Genisis 37:17 which reads, "...for I heard them say, 'Let us go to Dothan,"

Agriculture has long been the largest employer in the area. After timber was cut and land cleared, Dothan was the center of extensive cotton cultivation until the invasion of the boll weevil; following this devastation, farmers turned to peanut cultivation. The city feels justified in calling itself the "Peanut Capital of the World," and each autumn has a 2-week long celebration, the National Peanut Festival.

Dothan has aggressively sought industry and today boasts the plants of such well-known companies as General Electric and Michelin. It remains the largest town within a 90-mile radius, covering 21 counties in southeast Alabama, southwest Georgia, and northwest Florida. Dothan is served by several major state and U.S. highways, a regional airport, 30 major freight lines, and an inland waterway system.

With a population of some 55,000 and a market area of about 500,000 persons, Dothan serves as the hub of business, retail, and health care services in a region known as "the Wiregrass," because of the native wiry-stem grass found growing profusely on the land by early settlers.

Dothan is home to Wallace College, Fortis College and Troy State University-Dothan. It offers an extensive city-sponsored recreational program, including the operation of 11 parks and is less than 90 miles from beautiful sandy beaches. The cultural and educational life of the city is further enhanced with the Wiregrass Museum of Art, the Southeast Alabama Ballet and Dance Company, the Houston County Arts and Humanities Council, Botanical Gardens and the Wiregrass Arts Alliance.

Alfred Saliba Realty can help you find that special property in a number of local areas. Click on the one that interests you most!